For each plane, a camera model provides a set which consists of rotation and translation matrices. Corresponding sets, computed for the left and right camera based on the same plane, provide the information required to compute the spatial relationship between the two cameras. Stereo calibration returns a single rotation and translation matrix (R, T) that relates relative real-world coordinates for the left and right cameras. 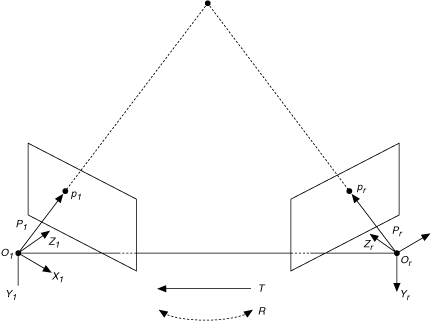 A camera model provides enough information to describe the relationship of the camera relative to a point (P) under inspection. Let, (Rl, Tl) and (Rr, Tr) be the rotation and translation matrices for the left and right cameras for the plane in which P lies. The real-world coordinates of the point P relative to the left and right cameras are given by the following equations:

The 3D coordinates of P are given by the following equation:

The stereo rotation matrix is given by the following equation:

The stereo translation matrix is given by the following equation:

After each camera is calibrated, the stereo vision system must be calibrated.