You can enhance the code as shown in the following figure to use named signal configurations by adding a Create Signal VI and wiring the signal name into the Selector String input of the VIs/functions the basic ACP code was already using. 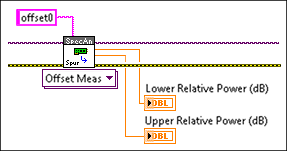 When using multiple features in the API, you can specify multiple contexts in the same Selector String input separated with a ‘/’. For example, to configure carrier 0 in the named signal configuration called “MySignal”, you must specify “signal::Mysignal/carrier0” as the selector string.

Another example of multiple contexts is performing LTE noncontiguous carrier aggregation measurements.  In this case, the signal is composed of multiple subblocks, and each subblock can contain multiple carriers.  When you configure a property of a carrier in LTE noncontiguous carrier aggregation, you must specify the index of the carrier within the subblock and the index of the subblock.   For example, you would specify that you are configuring the first carrier in the second subblock by using “subblock1/carrier0” as the selector string.

RFmx provides a set of utility VIs/functions/methods, as shown in the following figure, to build the context string for various measurement configurations.

For example, the Build Signal String VI takes in a named signal configuration name and/or a result name and constructs a string containing the contexts you specified.  If you call the Build Signal String VI with “MySignal” passed to the Signal Name input, the output string is “signal::MySignal”.  Each RFmx driver provides build string utility VIs/functions/methods for specific cases, such as Build Spur String2, which takes in a spur number in addition to optionally taking in a previously constructed selector string. If you call the Build Spur String2 VI with a spur set to 2, and the Selector String input set to the output of the previously called Build Range String2 VI, say range1, the output string is “signal::MySignal/range1/spur2”.

Notice that RFmx provides array versions of configure and fetch VIs that allow you to configure multiple instances of a property or fetch multiple instances of a result.  For example, to configure the frequencies of all the ACP measurement offset channels, you can use the ACP Configure Offset (Array) VI, passing in an array that has the frequency for each offset channel.  When using these array VIs/functions/methods, you do not need to specify in the Selector String input the context for the elements in the array.  For example, you pass “” as the selector string in the Configure ACP Offset Channel (Array) VI.  However, if you are using named signal configurations or named results, you pass those contexts in the selector string even when you use the array VIs/functions/methods.

The following table lists the various selector string formats that you can use. For integral channel specifiers, valid values for i are 0 to (number of channels - 1). For example, if you set the value of ACP Num Offsets property to 5, you can configure ACP offset properties for offset0, offset1, offset2, offset3, and offset4.

In the following table, the term channel or ch is used to refer to numeric contexts such as carrier, offset, or range.