This method allows you to clip the I and Q values of a waveform.

This method hard clips the signal to achieve the target PAPR. The following figure shows how the PAPR of a signal can be reduced by using clipping by Target PAPR. 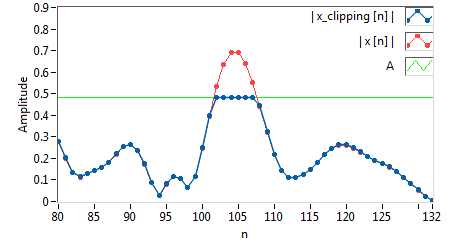 Clipping operation can be expressed as:

X[n] is the signal on which CFR is applied.

Xclipping[n] is the clipped signal.

A is the threshold level determined by target PAPR.

The clipping transfer function is represented by the following figure.

Peak Windowing is a CFR method that scales the peaks in signal using a weighted window function to get smooth peaks and achieve the target PAPR. This technique involves the following steps:

The following figure shows the input signal, the threshold level, and the signal obtained after applying the Peak Windowing method of CFR. 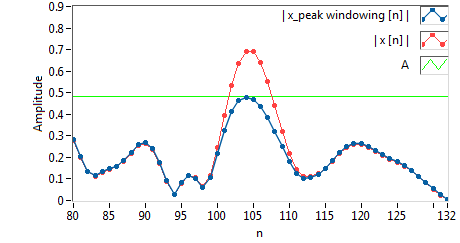 CFR is a non-linear operation that introduces out-of-band distortion in the signal. This distortion can be filtered out after the CFR operation.

CFR with filter can be applied on the waveform by enabling filter. The block diagram below shows one iteration of CFR operation with filtering.

CFR applies filtering per sub Block. The diagram below shows an example of sub block configuration for a signal sampled at S samples per second.

NI recommends the Clipping method of CFR, with filter enabled, to obtain waveform with desired PAPR.

[2] Braithwaite, R. Neil. A combined approach to digital predistortion and crest factor reduction for the linearization of an RF power amplifier. IEEE Transactions on Microwave Theory and Techniques 61.1 (2013): 291-302.