The advanced morphology operations are built upon the primary morphological operators and work on particles as opposed to pixels. Each of the operations have been developed to perform specific operations on the particles in a binary image.

Use the advanced morphological operations to fill holes in particles, remove particles that touch the border of the image, remove unwanted small and large particles, separate touching particles, find the convex hull of particles, and more.

You can use these transformations to prepare particles for quantitative analysis, observe the geometry of regions, extract the simplest forms for modeling and identification purposes, and so forth.

The advanced morphology functions are conditional combinations of fundamental transformations, such as binary erosion and dilation. The functions apply to binary images in which a threshold of 1 has been applied to particles and where the background is equal to 0.

The border function removes particles that touch the border of the image. These particles may have been truncated during the digitization of the image, and their elimination them helps to avoid erroneous particle measurements and statistics.

The hole filling function fills the holes within particles.

The labeling function assigns a different gray-level value to each particle. The image produced is not a binary image, but a labeled image using a number of gray-level values equal to the number of particles in the image plus the gray level 0 used in the background area.

The following table shows the effect of lowpass and highpass filtering.

Figure A represents the binary source image used in this example. Figure B shows how, for a given filter size, a highpass filter produces the following image. Gray particles and white particles are filtered out by a lowpass and highpass filter, respectively.

For example, after thresholding an image, two gray-level particles overlapping one another might appear as a single binary particle. You can observe narrowing where the original particles have intersected. If the narrowing has a width of M pixels, a separation using a filter size of (M + 1) breaks it and restores the two original particles. This applies to all particles that contain a narrowing shorter than N pixels.

For a given filter size N, the separation function segments particles with a narrowing shorter than or equal to (N – 1) pixels. These particles are divided into two parts after (N – 1) / 2 erosions.

The precision of the separation is limited to the elimination of constrictions that have a width smaller than an even number of pixels:

Skiz is an L-Skeleton performed on an inverse of the image.

The skiz (skeleton of influence zones) function behaves like an L-skeleton function applied to the background regions instead of the particle regions. It produces median lines that are at an equal distance from the particles.

The segmentation function is applied only to labeled images. It partitions an image into segments that are centered around a particle such that they do not overlap or leave empty zones. Empty zones are caused by dilating particles until they touch one another. 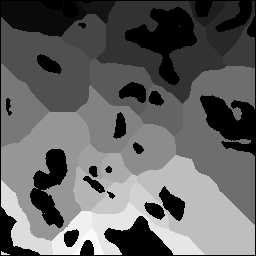 When applied to an image with binary particles, the transformed image turns red because it is entirely composed of pixels set to 1.

Comparisons Between Segmentation and Skiz Functions

The segmentation function extracts segments that contain only one particle. A segment represents the area in which this particle can be moved without intercepting another particle, assuming that all particles move at the same speed.

The edges of these segments give a representation of the external skeletons of the particles. Unlike the skiz function, segmentation does not involve median distances.

You can obtain segments using successive dilations of particles until they touch each other and cover the entire image. The final image contains as many segments as there were particles in the original image. However, if you consider the inside of closed skiz lines as segments, you may produce more segments than particles originally present in the image. Consider the upper-right region in the following figure. This image shows the following features:

The Danielsson function also creates a distance map but is a more accurate algorithm than the classical distance function. Because the destination image is 8-bit, its pixels cannot have a value greater than 255. Any pixels with a distance to the edge greater than 255 are set to 255. 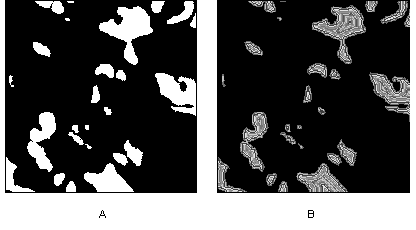 View the resulting image with a binary palette. In this palette, each level corresponds to a different color. Thus, you easily can determine the relation of a set of pixels to the border of a particle. The first layer, which forms the border, is red. The second layer, closest to the border, is green, the third layer is blue, and so forth.

The circle function separates overlapping circular particles using the Danielsson coefficient to reconstitute the form of an particle, provided that the particles are essentially circular. The particles are treated as a set of overlapping discs that are then separated into separate discs. This allows you to trace circles corresponding to each particle.

Figure A shows the source image for the following example. Figure B shows the image after the circle function is applied to the image. 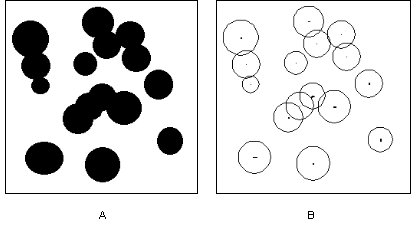 The convex hull function is useful for closing particles so that measurements can be made on the particle, even when the particle contour is discontinuous.

Figure A shows the original labeled image used in this example. Figure B shows the results after the convex hull function is applied to the image. 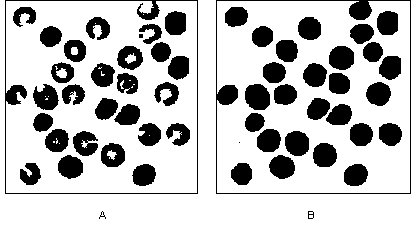