Parent topic: Getting Started with the Data Viewer Page

NI Transient, Periodic, and Event Recorder Monitoring Systems (CMS-9036) are designed to detect when a piece of equipment enters a particular state of behavior, and then collect and group a series of data files until the equipment reaches a steady state. For example, a device might detect when a turbine begins a run-up when the speed measured by a tachometer increases to above 200 RPM, and then enter an operating state in which it collects and groups files. When devices group files in this way, the resulting files are referred to as a stream. The Data Viewer page provides several features for displaying data that has been acquired as part of a stream.

A stream is a single entity that combines many measurements from one device for the purpose of visualizing the data as a group. This is useful because by interacting with a single stream, you can quickly view all data the device acquired when the equipment was experiencing the behavior of interest. In the case of run-ups and coast-downs, where speed measurements cause a data group to enter a stream-enabled operating state, a stream contains the trend of speed measurements throughout the run-up or coast-down, as well as data from each sensor in the data group.

The following steps describe the actions that occur during a stream-enabled operating state to produce a stream:

The following illustration shows the role of each component. 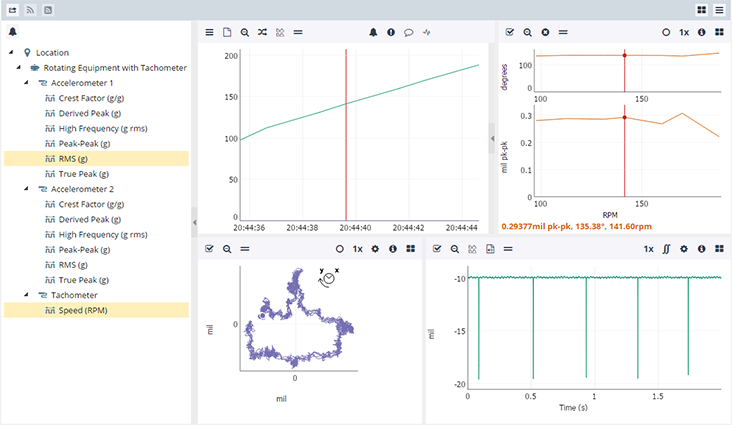 Streams consist of all the data that sensors on a specific data group acquire. A data group is a set of channels mapped to sensors that monitor the same piece of equipment. Data groups are useful in situations where a single device connects to sensors on multiple pieces of equipment whose data you want to acquire according to different parameters.

Multiple devices cannot share a data group. This means that if two devices monitor one piece of equipment, only data acquired by the one data group that experiences the enter condition is part of the stream.

Data streams are similar to periodic acquisitions in the following ways:

Streams differ from periodic acquisitions in the following ways: