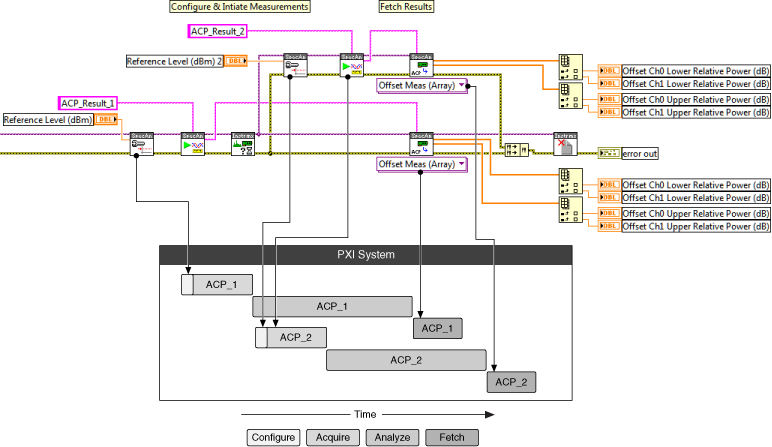 When using overlapped measurements, you must specify the result name in Initiate and then use that name to fetch the results. If you reuse the same result name, the previous named results with that name are overwritten. This behavior applies to the default result name (“”) as well. When you initiate a measurement, RFmx clears out all previous results with the same result name passed to Initiate; this clearing process keeps you from accidentally fetching a result from a previous Initiate. Notice that only the results with the same name in the default or named signal configuration passed to Initiate are cleared. For example, if you call Initiate with Selector String set to “signal:MySignal” and Result Name set to “MyResult”, Initiate clears all results named “MyResult” that were previously initiated with the signal “MySignal”.

RFmx provides a set of Build String Utility VIs to create named result strings as shown in the following figure.

The following figure shows how to use a property node to fetch a result using an arbitrary result name.

The following example program conducts multiple TxP measurements at different frequencies and clears the named result for TxP measurement after it has been fetched.

The following figure demonstrates the sequence of events for the previous TxP measurement example.

Depending on the computational complexity of the measurement, the overlapped measurements technique can have a huge impact on overall test time. Measurement parallelism is a known technique to reduce test time; RFmx makes this easier by managing threads and results, so you can develop and realize the benefits of PXI faster.