When users configure a device in the InsightCM web application, they assign the device channels to one or more data groups. A data group is a set of channels that share acquisition properties and whose data and calculated features are written to the same data sets. Data groups are useful in situations where a single device connects to sensors whose data you want to acquire, analyze, and log according to different parameters. Consider the following simplified example where one device monitors two pieces of equipment. 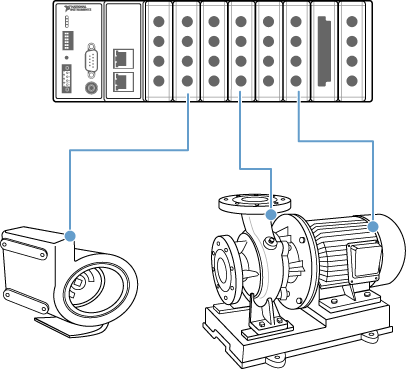 Assigning the channels on each piece of equipment to different data groups allows you to configure unique behavior for each group of channels even though they belong to the same device. The following example shows how defining separate data groups allows users to configure behavior that is appropriate for each piece of equipment.

Establishing separate data groups also ensures that if a particular event, such as a run-up by the turbine, triggers the device to collect data as part of a stream, the stream contains data from only the turbine instead of from all channels, including those not affected by the run-up.

Data groups are an important concept in device software because processes in the Dataflow Script operate on data from a single data group at a time. This behavior allows processes to act on data according to the unique properties of that data set. For example, the following illustration shows how the FPGA Acquisition process bundles data from channels in the same data group together, and then the Trigger process evaluates the data from unique data groups according to their unique exit-condition settings.

When you develop device software, refer to the following guidelines that might impact your programming:

Providing Configuration Data to a Process